Oliver Stone is an American director, writer, producer and actor. He is a four-time Oscar winner: Best Adapted Screenplay for “Midnight Express” in 1978, Best Film and Best Director for “Platoon” in 1986, and Best Director for “Born on the Fourth of July” in 1989. He has directed some twenty feature films, including several documentaries and biographical films. He directed “Wall Street” in 1987, which earned actor Michaël Douglas an Oscar, and for which Rémi Lainé directed a documentary in 2017 as part of the collection “A Film & its Era” (produced by Folamour).

After a documentary film about Fidel Castro (“Comandante”, 2002), and three biographical films on US presidents: “JFK” about John Fitzgerald Kennedy (in 1991), “Nixon” (1995) and “W: the improbable president” about George W. Bush (in 2008), Oliver Stone embarked on a television project consisting of an 8-part documentary series entitled “Another History of America”.

In 2017, after a dozen hours of unpublished interviews with Putin, he directed a 4-hour television series “The Putin Interviews“, released in France on F3. 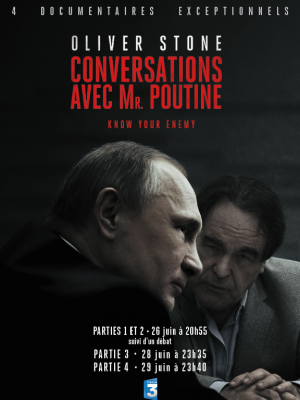